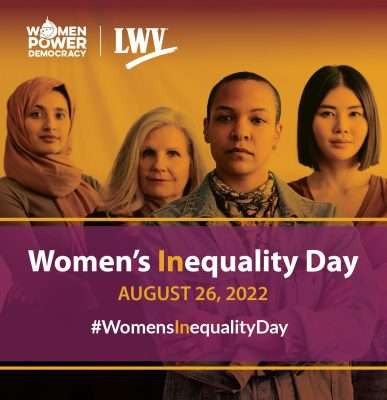 August 26, the anniversary of the certification of the 19th amendment, is often known as Women’s Equality Day.  Yet with our voting and reproductive rights under attack, women are still not equal in our democracy.

This year, LWV is observing Women’s Inequality Day and demanding that our representatives:

2. Add the Equal Rights Amendment to the Constitution; and

3. Restore reproductive freedom to women and those who can become pregnant.

Join us in taking a stand and sharing #WomensInequalityDay across your social networks.

We may not yet be equal, but together we can’t be ignored.

LWVUS 55th Annual Convention will be taking place on June 23 – 26, 2022.  Attendees will have the opportunity to join the convention in-person in Denver, Colorado or participate online.  More information can be found here.

If you are a member of LWVN and would like to attend the National Convention, please Contact Us so that we can know who will be attending.

Ellen Clegg, former Editorial Page Editor of The Boston Globe, and Northeastern University Professor Dan Kennedy, are the keynote speakers. Their remarks will focus on the collapse of community journalism and its causes. We will learn, too, of the alternative paths that entrepreneurial journalists are creating to keep providing news and information citizens need to govern themselves in a democracy.

There’s no limit to the number of members who can register; the leadership of LWVN will designate its voting delegates. There is no cost to attend as delegate or as an observer.

This event will be held on zoom.  Register here.

LWVUS has published the first call for its 55th Annual Convention June 23 – 26, 2022.  This event will beheld in-person.  More information can be found here.

If you are a member of LWVN and would like to attend either the State Council or the National Convention, please Contact Us so that we can know who will be attending.

“Today, the police officer responsible for the murder of George Floyd was held accountable for his crime.

“While the decision to convict George Floyd’s murderer was just, it does not remedy the undeniable fact that policing in America is fundamentally broken.

“The United States’ system of law enforcement, which was built on the legacy of slavery and racism, has stolen the lives of Black and brown Americans for centuries, almost completely unchecked.

“Making one man answer for his crimes does not equal justice. This conviction was an outlier in a system built on white supremacy. Accountability and the eradication of racially-motivated violence should be the norm, not an exception. Police officers must be held to the same level of accountability as everyone else.

“We must radically reimagine public safety in this country and prioritize investments in economic opportunities, education, healthcare, and other community-led solutions, instead of perpetuating police violence.

“Our thoughts are with the family of George Floyd. We hope that this decision provides a modicum of peace amid this tragedy.

“Today’s decision must represent a turning point as we work towards true reform of policing in this country.”

Last night, the full LWVUS and LWVEF boards met to consider the events of this week and unanimously voted to call for the removal of President Trump from the office of the president.

And this afternoon, we issued an action alert for people to call their senators and ask them to support impeachment.

This was an unprecedented decision for our organization. As a respected, 100-year-old nonpartisan institution, the League’s action represents the grave and extraordinary nature of this moment in history. The world we live in is fundamentally different after the events of January 6.

Donald Trump showed himself to be a dangerous agitator with the power and will to upend our democracy by force. He is a threat to our republic and to our national security.

We know that this decision will be controversial, but this moment in history demands we protect and defend our democracy. We cannot stand silent as the actions of President Trump this week have demonstrated he is unfit for office. We will not endure the next two weeks and the potential for further damage to our democracy and the world. It is time to remove him from office by any legal means possible, which is why LWVUS supports both impeachment and the 25th Amendment as viable options to ensure safety of Americans and preservation of our republic.

The statement we issued this morning was not a partisan one. As we made clear in the statement, we support the processes that would remove Donald Trump and install Mike Pence as president for the remainder of the term. On January 21, we are hosting a webinar how our nonpartisan and DEI policies intersect and how to navigate them during hyper-partisan times. We welcome everyone to attend.

All of you, our members across the country and around the world, have joined this organization because you believe in the power of women to create a more perfect democracy. Today, we ask you to stand together in this decision to defend democracy as we have for 100 years.

The U.S. Senate must prioritize protecting the American people during the pandemic and securing our 2020 elections

“Four years ago, Senate leaders set a precedent for how the confirmation process for a Supreme Court justice appointee should occur during a presidential election year. In 2016, a Supreme Court seat sat vacant for more than 300 days, showing that there is no reason to rush this process in 2020. If it was too soon then, it’s too soon now.

“The American people are in despair during this global pandemic: millions are out of work and more than 200,000 have lost their lives to this deadly virus. It is the duty of our elected officials to provide relief to the American people and ensure all voters can participate in our democracy by safely casting their votes this year.

“Supreme Court justices serve for life and make decisions that impact every American. They require a thorough vetting process that is transparent to the American people. Such a process would be undermined if rushed through.

“Now is not the time to rush a lifetime appointment to the United States Supreme Court.”