Please note: This issue of the newsletter was prepared in late April and should have been distributed in early May. Despite the delay in publication, we’ve chosen to include all the original submissions, as well as some updates from the Annual Meeting held June 14.

LWVN held its first virtual annual meeting on Sunday, June 14. Thirty-one members attended via Zoom and held multiple votes by Zoom poll, approving the program recommended by the board; a set of revisions to update the bylaws; and a budget and slate of officers and directors for 2020-21.

For those who were unable to attend, we include the Presidents Message below. We also recommend reviewing the annual workbook, emailed to all members several weeks before the meeting, which is full of information about the work of the LWVN over the past year as well as our plans for the coming year.

From the President - 2020 Annual Meeting

One of the highlights of the 2019-2020 term has been the tremendous amount of work completed by our Marketing & Communications (MARCOM) team of Jennifer Abbott, Frieda Dweck, Karen Manning, and Lisa Mirabile. It is through their energy, enthusiasm and talent that the LWVN has been proactive and innovative in our outreach to local leagues, LWVN members and the community at-large for participation in our events. They have leveraged direct email, Facebook, our website and weekly updates to generate interest and ultimately increased participation in our topic meetings and special events, to be highlighted within this newsletter. Below are a few of our new and unique events that benefited from the capabilities and planning of this team: 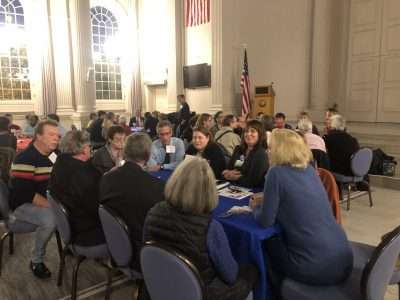 Starting with the November Municipal elections for City Council and School Committee. With the leadership of Sue Flicop , Sharyn Roberts, and Lucia Dolan, the LWVN was able to hold its first, and hopefully not last, Saturday Night at the Races where residents were able to interface directly with all candidates (challenged & unchallenged) for the 2020-2021 City Council. Of course, this was in addition to organizing candidate forums for challenged city council races and the Voters’ Guide.

Of course we cannot forget that 2020 is the 100th anniversary of the League of Women Voters where we celebrated our birthday on February 14 with LWVN members, neighbors, and friends. 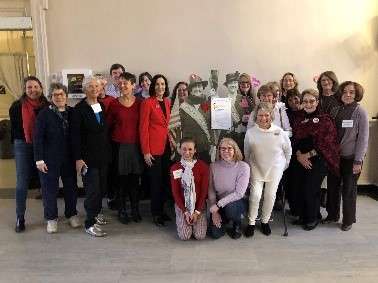 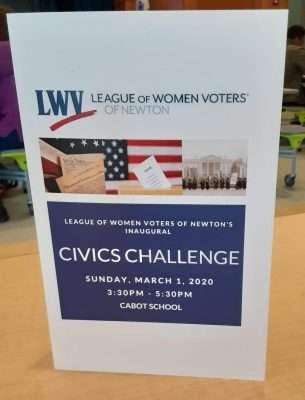 The LWVN had another inaugural event this year and it was the Civics Challenge. This was a fantastic event led by Frieda Dweck and her team of Jennifer Abbot and Karen Manning. The LWVN was well represented by the “Crew” with the team of Bonnie Carter, Maureen Reilly Meagher, and Lisa Mirabile.

Please look further into the newsletter for Frieda Dweck’s article describing this event along with all our other fantastic topic meetings.

We need to finalize our plans to commemorate the 100th anniversary (August 26th) of the adoption of the 19th Amendment to the U.S. Constitution, ratified in 1920, prohibiting the federal and state governments from denying citizens the right to vote on the basis of sex. I invite those with an interest in history, are excited about this important achievement for women, have time and energy to plan event(s) to please send an email to info@lwvnewton.org and let us know how you would like to be involved.

As we are coming to the end of the 2019-2020 term, please watch for the invitation to our Annual Meeting to be held in June. As we plan this important meeting and social event, we will be mindful of the coronavirus situation and the safety of our members. Therefore, we may need to hold the work- part of our meeting virtually with a delay in the social time until a bit later in the year.

Marcia Johnson
President, League of Women of Voters of Newton

The LWVN board voted to join a group of local organizations who wrote to our state delegation to support H.4263: An Act to Promote Housing Choices, sponsored by the Governor.

In line with the League’s main objectives of educating citizens about their civic responsibilities and to increase participation in government, LWVN held its inaugural Civics Challenge on March 1st at the Cabot School.  We had 9 teams consisting of family & community groups, middle school, high school, and college students, teachers from NSHS, and a group from the Newton TAB.

City Councilor Josh Krintzman and former Alderman Brooke Lipsitt were our informative and entertaining masters of ceremony. Our judges for the evening were Linda Morrison, Courtney Rau Rogers, and Sue Flicop.

Please join the LWVN in congratulating the three winning teams:

We want to thank the Village Bank for its support of the event; Congressman Joe Kennedy for the donation of the pocket constitutions which were given to all participants; State Senator Cynthia Creem and Representatives Ruth Balser & Kay Khan for donating a tour of the State House as our first place prize.  In addition, our first place winners received signed copies of E is for Election Day by Gloria Gavris.

The citizens of Newton voted, on March 3rd, to uphold the City Council’s approval of the Northland Project in Upper Falls.  The City Council had spent approximately two years working with the developer to arrive at a project that will provide the city with important benefits relative to housing, the environment, and open space, as well as a transportation demand management plan.

In September 2019, the Board sent a letter of support to the City Council, as we thought that this project was in line with so many of the LWVN’s programs & positions.  At the time of the referendum signature gathering process by the Committee for Responsible Development (CRD), we re-sent our September letter of support for the project to you.  At the time of the referendum, we held an educational forum on the project.  Unfortunately, the CRD  declined to participate.  However, Councilor Deb Crossley, Councilor-at-Large, Ward 5 did participate and presented on behalf of Yes for Newton’s Future.  Councilor Crossley was able to respond to some of the questions that evening, but not all.  Therefore she provided  responses, in writing.  We hope that you found the forum and detailed Q&A helpful in your decision-making process.

Lastly and most importantly the Board carefully examined our position along with citizens’ questions and concerns and made a determination to re-affirm our support for the project and all of the benefits we believe it will bring to those who currently are in Newton and those who wish to live, work, and play in Newton.

In August 2019 after having been to the Women’s Equality Day sponsored by Suffrage 100 MA, I reached out to Ellen Grody to see what she thought about connecting with Mayor Fuller about doing something to commemorate woman’s achievement of prohibiting the federal and state governments from denying citizens the right to vote on the basis of sex.  As a result of this meeting, a coalition was created consisting of LWVN, Dana Hanson, Director of Community Engagement & Inclusion, Ellen Myers, Newton Free Library, and Lisa Dady, Historic Newton.  At our city-wide kickoff meeting in September, a number of other civic organizations including Newton Cultural Development, Mass Historic, Newton North High School, Citizens for Housing Affordability in Newton, Capella Clausura, and the Human Rights Commission joined the coalition.  We have created a mission statement, tag line, logo, and a growing integrated calendar of events which can all be found on the Mayor’s website.

LWVN has actively been participating with the Coalition to educate and celebrate:

In October, 2018, Barbara Berenson, author of Massachusetts and the Woman Suffrage Movement (2018) published a short piece in the Washington Post entitled “Politicians beware: Crossing Women Comes at a High Price.” She recounts the massive campaign here in the Bay State aimed at unseating one of our two anti-suffrage US Senators.  John Weeks was a former mayor of Newton and served in the House of Representatives for many years.  He had been elected by the state legislature, but since the 17th amendment authorizing popular votes for US Senators took effect while he was in office, it was the popular vote he needed to win re-election in 1918. Senator Weeks was defeated thanks to the tireless research and organizing by women who could not vote.

Legislation at the State House

Among the bills LWV MA is supporting at the state house, these three have advanced:  Sen. Cynthia Stone Creem’s bill S.900, An Act relative to the expungement, sealing and criminal records provision. This bill allows for expungement of misdemeanors after 3 years and felonies after 5 years as long as there are no other convictions at that time for those up to age 21. The bill has been sent to study so it will not be acted on in this session.

The reporting deadline on H.3573, Safe Community Act sponsored by Rep. Ruth Balser is An Act to protect the civil rights and safety of all Massachusetts residents and ensure fair treatment of undocumented people and public safety, has been extended to May 1st. Rep. Balser is working closely with Chair Naughton and others including police chiefs to try to move the bill forward.

H.1948, a bill sponsored by Rep. Khan, is An Act Relative to Out-of-Hospital Birth Access and Safety. Currently, home birth is limited to those who have the means to pay out of pocket. This legislation creates a process for licensure of certified professional midwifes (CPMS) overseen by a Board of Midwifery under the Department of Public Health. About 40% of births in Massachusetts are currently covered by Medicaid Mass Health, and this bill would make midwives available to those women who want a home birth. The bill received a favorable report from the Joint Committee on Public Health and is now before the Joint Committee on Health Care Financing.

Keep a lookout for these bills!

We welcome all the members who are new to the League since October 2019!