You are here: Home / Archives for LEARN - Topics of Interest / Women's Suffrage / WSCC 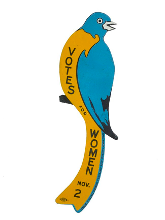 On July 19, 1915, “Suffrage Blue Bird Day,” approximately 100,000 colorful, tin 12” x 4” Blue Birds were pinned up around the state in an effort to promote passage of an upcoming Nov. 2, 1915 referendum that would have expanded the vote (federal, state and local elections) to women. Unfortunately, the Massachusetts referendum failed, and Massachusetts women did not gain the vote until the 19th Amendment to the U. S. Constitution was ratified in 1920.

Let’s plaster social media with Blue Birds and remember the suffragists! This is a great activity for all ages. Check Suffrage100MA website for info on how you can get involved, including how to draw a Blue Bird. 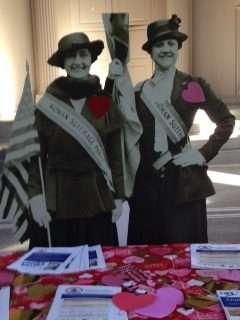 If you are interested, please send an email to info@lwvnewton.org and let us know how you would like to be involved.

On January 23rd,  Fredie Kay, Founder & President of Suffrage100MA was the League’s guest.  The Voting Rights for Women show focused on three topics regarding the celebration of the upcoming 100th anniversary of the adoption of the 19th Amendment to the U.S. Constitution, ratified in 1920, prohibiting the federal and state governments from denying citizens the right to vote on the basis of sex.

Suffrage 100 Massachusetts  It’s mission is to commenorate the centennial of the ratification of the 19th Amendment, granting women suffrage.

The  Women’s Right-to-Vote Coaltion of Newton  – We have joined together to celebrate the 100th anniversary of the passage of the Nineteenth Amendment which established women’s right to vote nationwide.  Through education and the arts, we honor the struggle suffragists endured to gain this first step in voting rights and acknowledge that the journey continues.

allies won the biggest growth in deocracy in the last 100 years.  We celebrate this great accomplishment by standing in our power, but at the same time, we acknowledge that the 19th Amendment did not break down voting barriers for all women.  Even today, our work is not done.

Thank you to Fredie Kay.

At the celebration of Women’s Equality Day on Friday, August 23rd, we celebrated three Sheros…. African American Suffragists of Massachusetts:

The Suffragist of the Month Panel Project, a collaboration of the Commonwealth Museum and the Wommen’s Suffrage Celebration Coaltion, of which the League of Women Voters of Newton is a member.

Newton voters...
Don’t wait —VOTE by mail today! Make sure to follow all the instructions included with your ballot.

* Mark your ballot carefully by filling in the ovals completely

* Place your ballot in the yellow ballot envelope and seal the envelope.

* Sign the ballot envelope on the signature line and print your name and address where indicated.

* Put your signed, sealed yellow ballot envelope into the white return envelope and seal that envelope.

* Return your ballot by mail or in-person at the drop boxes located at City Hall.