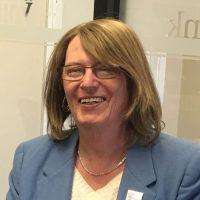 A life-long resident of Oak Hill Park, Holly Ryan is a veteran activist making her first foray into public office. She will be the first openly Transgender woman to serve on a City Council in Massachusetts. Holly served as a Newton Human Rights Commissioner and LGBTQ+ Liaison in the Mayor's office.

When I was new to the LGBTQ Cavil Rights movement and a leader, I took the word of a person that they were discriminated against without much investigation. It turned out the person was regularly in violation of their contract and was at fault and was not being discriminated against because of who they were. I learned to always investigate fully and make my own decisions and be able to stand behind them.

The climate crisis is now and in Newton we should do our part to eliminate green house gas emissions.

We need more affordable housing in Newton both multi and single family. Any large multi-use development should be transit oriented. We should work with the surrounding neighborhoods on the larger developments.

As a city we should settle the teachers and all union contracts soon. Our schools are the reason young families move to Newton and our other union workers keep us safe and make us the garden city. I would like to see the Armory used for real affordable housing units and find a central location in the city for NewCal with the emphasis on seniors. We should protect the open space we have throughout the city.