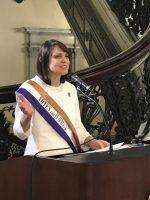 On January 23rd,  Fredie Kay, Founder & President of Suffrage100MA, was the League’s guest.  The Voting Rights for Women show focused on three topics regarding the celebration of the upcoming 100th anniversary of the adoption of the 19th Amendment to the U.S. Constitution, ratified in 1920, prohibiting the federal and state governments from denying citizens the right to vote on the basis of sex.

Suffrage 100 Massachusetts  It’s mission is to commemorate the centennial of the ratification of the 19th Amendment, granting women suffrage. 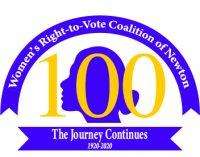 The  Women’s Right-to-Vote Coalition of Newton  – We have joined together to celebrate the 100th anniversary of the passage of the Nineteenth Amendment which established women’s right to vote nationwide.  Through education and the arts, we honor the struggle suffragists endured to gain this first step in voting rights and acknowledge that the journey continues.

allies won the biggest growth in democracy in the last 100 years.  We celebrate this great accomplishment by standing in our power, but at the same time, we acknowledge that the 19th Amendment did not break down voting barriers for all women.  Even today, our work is not done.